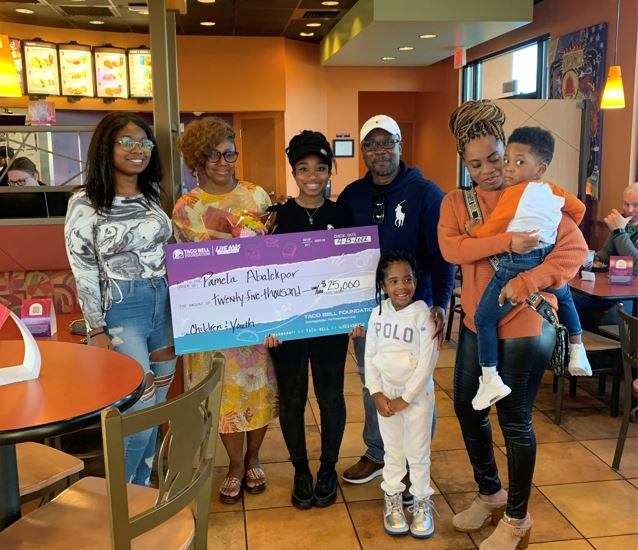 Four of your local Omaha Taco Bells awarded six of its employees a total of $70,000 in scholarship funds for furthering their educations.

Each recipient received their scholarships at a surprise party at the Taco Bell where they worked and were surrounded by employees, families and their predecessors.

The two team members from 16845 Polk Plaza in Omaha, NE received a combined $35,000, which included Pamela Abalekpor who received $25,000, the highest scholarship!

Abalekpor has been a team member for more than two years and has followed her father’s footsteps in the Taco Bell company by working side-by-side with him. After graduation, she plans to pursue her dream of helping children & youth by attending the University of Omaha, in NE.

Bernice Lawson, the second team member from Polk Plaza received $10,000 and plans to use her scholarship to pursue her passion of Health and Fitness at the University of Omaha, in NE.

A combined total of $15,000 were awarded to two team members from 3211 N 108th Street in Omaha, NE which included Matthew Eversole and Shalyee Fogelstrom.

Eversole has been a Taco Bell team member for a year and plans to use his $10,000 scholarship to become an Aerospace Engineer and study at Embry Riddle.

Fogelstrom, who has been with the Taco Bell Team for two years and plans to use her $5,000 scholarship at the University of Omaha, in NE where she will focus her studies on Health and Fitness.

The final two recipients in the Omaha area include Kaylee Adzafui and Samuel Nading.

Adzafui is a team member from 84th and Center in Omaha, NE, who also awarded $10,000. Adzafui plans to use her scholarship to pursue her passion of medicine at the University of Omaha, in NE. This is her 2nd year in a row of winning this scholarship!

The last recipient, Nading, who works at 16116 Stephen’s Pointe Circle in Gretna, NE, plans to use $10,000 scholarship to pursue his passion of Civil Engineering at the University of Omaha, in NE.

About the Live Más Scholarship:
The Taco Bell Foundation’s Live Más Scholarship is designed to fuel students’ boldest educational and career ambitions. The application requires a 2-minute video describing your passion and how you plan to use it to ignite change. Both Taco Bell Team Members and any fans of the brand ages 16-26 can apply. Scholarships range from $5,000 – $25,000 per student. The Taco Bell Foundation has awarded nearly $30 million since 2016.

Celebrations
We use cookies on our website to give you the most relevant experience by remembering your preferences and repeat visits. By clicking “Accept All”, you consent to the use of ALL the cookies. However, you may visit "Cookie Settings" to provide a controlled consent.
Cookie SettingsAccept All
Manage consent

This website uses cookies to improve your experience while you navigate through the website. Out of these, the cookies that are categorized as necessary are stored on your browser as they are essential for the working of basic functionalities of the website. We also use third-party cookies that help us analyze and understand how you use this website. These cookies will be stored in your browser only with your consent. You also have the option to opt-out of these cookies. But opting out of some of these cookies may affect your browsing experience.
Necessary Always Enabled
Necessary cookies are absolutely essential for the website to function properly. These cookies ensure basic functionalities and security features of the website, anonymously.
Functional
Functional cookies help to perform certain functionalities like sharing the content of the website on social media platforms, collect feedbacks, and other third-party features.
Performance
Performance cookies are used to understand and analyze the key performance indexes of the website which helps in delivering a better user experience for the visitors.
Analytics
Analytical cookies are used to understand how visitors interact with the website. These cookies help provide information on metrics the number of visitors, bounce rate, traffic source, etc.
Advertisement
Advertisement cookies are used to provide visitors with relevant ads and marketing campaigns. These cookies track visitors across websites and collect information to provide customized ads.
Others
Other uncategorized cookies are those that are being analyzed and have not been classified into a category as yet.
SAVE & ACCEPT